Hi all! Back again with another WIP Wednesday from the FTGT Painting Desk. I’ve been putting in a lot of the unglamourous early work required in a big kit like this Warhound Titan. Last week was literally simply laying out pieces and cleaning flash and mold lines from larger pieces. This week I’ve finally been able to begin the process of assembly. 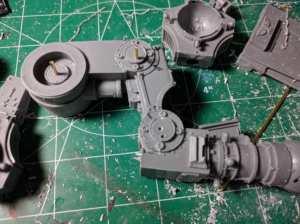 While it doesn’t look like much, I’ve made progress on the two main sub-assemblies in the kit. For the torso, it’s been a two day process of epoxying and clamping large pieces of resin. First day was the two shoulders with the back and waist. 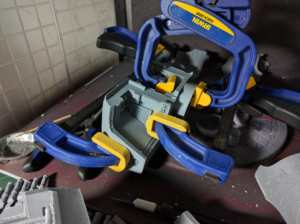 At the same time, I also attached the upper carapace pieces together. 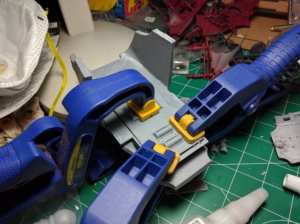 Once these cured for 24 hours, I added the front of the upper body to the main torso, along with the shoulder gun mounts. 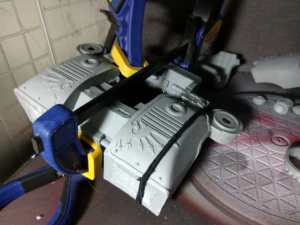 Meanwhile, I also began the sub assembly for the upper body, which requires a good bit more precision and care. For this I have only been pinning and will wait to epoxy the pieces into place until I have pinned the entire leg assembly and am happy with the stability and pose.

For the hips, I drove a large pin through both ball joints that attach to the legs to allow me to rotate the waist for initial posing. Once satisfied, these will be supplemented by several other pins to prevent rotating. 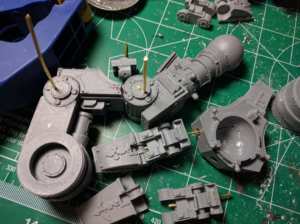 This same process was followed for the legs, where I drove a pin through the two main joints. Once posed, these were supplemented by a second pin on each side to stop rotation. These are currently kept long so they can be better removed for applying epoxy.

Each of these major joints will likely receive three or more pins to maintain stability, as they support the weight of the entire model. The toes, which also support a lot of the weight are pinned, but thanks to their size and shape, will be harder to support with more than a single pin. To help add stability and support, the titan will be getting a base, with one foot bolted into the 3/4″ thick basing material.

While it doesn’t look like much now, a lot of the hard work is out of the way – from here there will be some pretty rapid progress for assembly. I’m hoping for next week’s update to have the model’s sub assemblies completed, and priming to have begun. Check in next week to see the beast come together.

Also, when my internet cooperates, I’ve started streaming on twitch, so come check out my channel if you are interested and give let me know you’re in the stream – I’ll try to answer questions, though have noticed some lag thanks to my rather lousy internet.