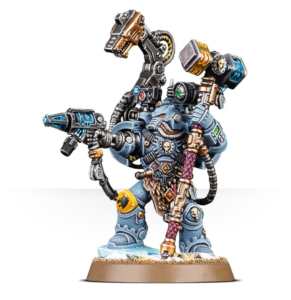 You guys know I invented the super friends list ages ago.  We have seen many different variations of it over the years but the concept has remained the same.  You need a unit that can withstand a lot of firepower and still deliver a powerful punch when you reach the enemy.  Ideally you do this no later than turn 2….

With the addition of the new Space Wolves codex and the Champions of Fenris specifically, we received a formation called the Company of the Great Wolf. This formation’s requirements are largely only HQ and Elite slots but also gave you the option of taking every other slot in the codex.

The ‘default’ choice was an HQ that helped in some way with close combat and then two or three Iron Priests on Thunderwolves.  You could back these guys up with a unit of Thunderwolf Cav from this formation if you we’re just going to throw all the ICs into a Space Marine Command Squad or equivalent unit.

In my lists I have been typically running a Wolf Priest with a Bike and Runic Armor coming in at 160 points and two Iron Priests in the elite slots at 165 points each.  I rely mostly on the backs of the Iron Priests with their Cyberwolves as both ablative wounds and a bit of insurance against Grav Weapons since they are AV 4 and there are 8 of them in the unit at the start of the game giving me a majority target number 4 for all Grav to wound.

So what does this mean to us?!

The Iron Priest is a base 20 points more expensive but the Thunderwolf and Cyberwolf upgrades remains the same point cost.  20 points is 20 points and taking two of them means we need to now account for 40 more points in our lists.   I was a little worried about this at first.

Then it occurred to me that the Wolf Priest is good but…. he’s not amazing and costs a fair share of points.  All of the Space Wolf HQs come in at ‘comparable’ point values once you add a mount and runic armor to them.

I chose the Wolf Priest (I know there are a lot of priest references here) due to the Healing Balms (6+ FNP), Fearless and the Oath of War rules.  I often duplicated these rules with other special characters like Dante, a Blood Angel Priest, or the fluff killing Samael from the Dark Angels.   If I decide to ditch the Wolf Priest I am likely not losing too much.

The previous configuration with a Wolf Priest and two Iron Priests came in at 480 points.

The ‘new’ configuration doesn’t require the HQ tax but it does require me to find a replacement for the required Elite slots in the Company of the Great Wolf formation.

Thankfully the Space Wolf codex provides us with a lone Servitor for 10 points.  You need to take two units of these for a total of 20 points. Edit: You can’t take servitors to fill a slot if you include an Iron Priest.. you can’t even take a Lone Wolf either… Heh..  It looks like you have to take Wolf Scouts or Dreadnoughts to be on the cheap and Wulfen might be ‘best’ choice for combat. 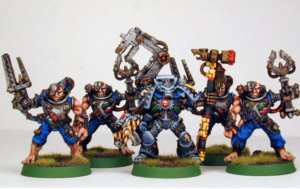 I know what you’re thinking.  This is a terrible choice and they will easily be killed by anyone who shoots the weakest of weapons at them.  But… the enemy still has to do that and take attention away from your power unit (Death Star). Edit 2: Just take a wolf scouts, ha.  Thanks to the folks that pointed out the holes in this.  I’ll do better next time!

So let’s get back to the Iron Priest.  At base he is 20 points for expensive so for the 4 wolves,  and the Thunderwolf he comes in at 185 points.  NOW, in the new entry we get the option of upgrading his thunder hammer to a Tempest Hammer for 5 points.  The Tempest Hammer works very much like the Frost range weapons.  Each Wound requires the target to take a Str check at the end of the round or be removed from play.

For a model with multiple attacks, who is almost guaranteed to swing and wound at Str 10 I think this is a pretty good investment against Wraith Knights, Super Tunas and whatever else the came throws at us.  Still, its optional and a way to save 5 points if you need them.

With the hammer upgrade we’re looking at 190 points per Iron Priest.

The Company allows for more HQ choices – we can load up at still take the Wolf Priest or Wolf Lord or whatever you want.  If you do that you’re paying the extra 20 per priest and still have to pay the Elite tax.

There are obviously better elite choices.  I just am not sure, right now, which would function better in a super friends unit outside of a couple of servitors tooling around the back field.

Wolf Scouts, or even a Dreadnought, are another possible lowish points option.  Wulfen are a real stand out choice if you want to invest some points in this option.  Heck.. we might even get some sweet DeathWatch options here.

The ‘new’ way is actually 80-90 points cheaper but exposes us to other weaknesses.  The ‘best’ way is likely going to be to take at least one stout and effective Elites choice and a lone servitor in a rhino or derdling around somewhere safe.  This possible cost savings does not include the fact that we may also add in a unit of Thuderwolf CAv for the Super Friends to ride with.

What do you think?

While you are here, please check out the latest episode of our Podcast.