Hey guys, FTGT Evan back again from the FTGT Painting Studios. Over the last week I’ve continued working on the Kabalite Warriors from last week. I had hoped to have them finished, and they’re getting close, so I should have the final product to show next week. 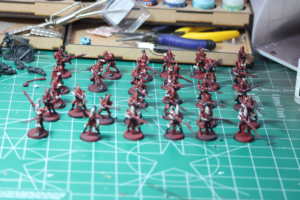 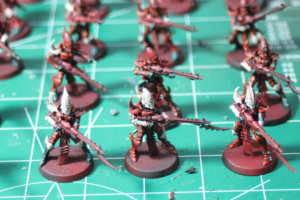 On the green bodysuit and hair and tassels, I added Kabalite Green and then Sybarite Green highlights. 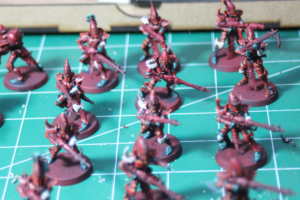 Finally, for the bone plates, I hit the recesses with Agrax Earthshade, then touched up the Rakarth Flesh, followed by an edge highlight of Pallid Wych Flesh. 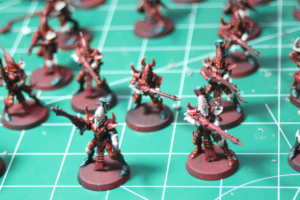 In addition to working on the Kabalite Warriors, over the weekend I assembled and airbrushed up a Knight. I magnetized the arm options for all four main options. I opted to assemble the Rapid Fire Battlecannon over the Thermal Cannon. For the next kit I’ll use the Thermal Cannon. 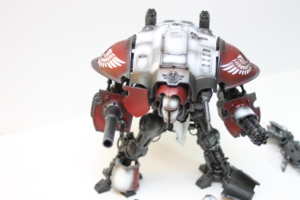 I opted for a red and white scheme to match my planned Carmine Blades themed Raven Guard army. I used some templates from Fallout Hobbies to get the wings on the Shoulder-guards. 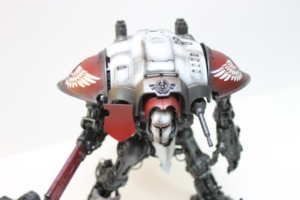 The metal was painted with Vallejo’s Model Air Black Metal. For the red I used Minitaire Angelic Blood and Nebula Red. Then for the White, I was opting for a dirty browned white, so base coated it with Vallejo Model Air Burnt Umber, followed by Vallejo Sand (Ivory) and finally Minitaire Snow White. 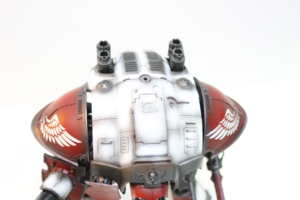 That pretty much finishes out the airbrush portion of the knight, at least until I get to the weathering and OSL sections, but that will come after painting up the trim and details. I’m planning on adding some heavy scoring and weathering.

Thanks for checking out what’s been going on at FTGT Painting Studios, and keep an eye out for next week, when I should have finished up the Kabalite Warriors and moved on to some character models.