Hey everyone, Evan from Facing the Grey Tide here. This is the first in what I plan to be a weekly series of posts going over what I’m working on for my commission studio, FTGT Painting.

For the past several weeks, I’ve been working on a Dark Eldar army in the scheme of the Kabal of the Flayed Skull. I am doing a “by the book” scheme here, and following the steps outlined by GW in the Raiders of Commorragh book.

The first thing I worked on were some of the vehicles, namely the Venoms and Razorwings. 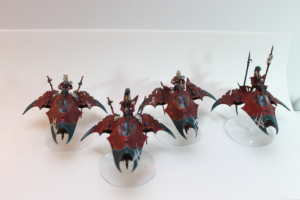 For both sets of vehicles, I did some small freehand designs to differentiate them. As a note – the Flyer bases will be done in a sand theme with the rest of the army once they are complete. One Razorwing is borrowing a base for this photo-shoot. 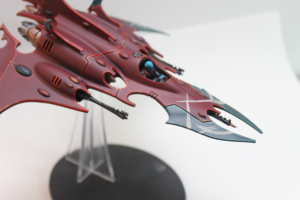 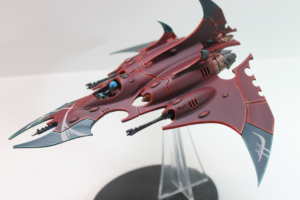 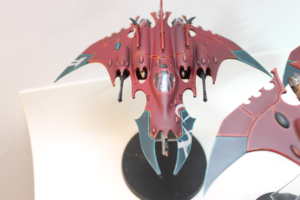 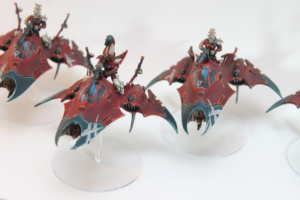 Finally, for the Venoms, two of the gunners are from the old Vect kit to make them a bit different. 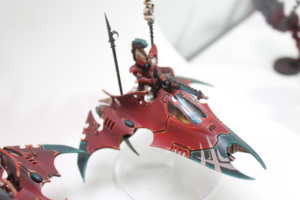 With those vehicles done, I moved on to a block of 30 Kabalite Warriors. 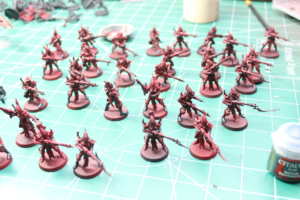 The warriors (and most of the army) were started with a base coat of Khorne Red through the airbrush. I then went in and blocked in the bodysuit with Incubi Darkness. This was followed by a wash of Nuln Oil on the red and green sections.

This week I’ve been bringing the base colors back up. I then blocked in the bone armor segments (2-3 per guy somewhat randomly selected). This was followed by beginning the process of edge highlighting the armor using Evil Sunz Scarlet. 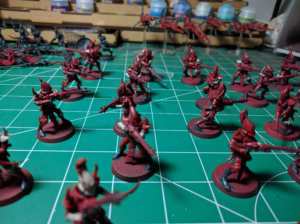 I am a bit more than half-way through this first edge highlight, which will be followed by a final edge highlight of Jokaero Orange. 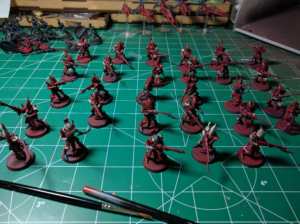 For next week, I hope to have these guys wrapped up and moving on to the characters in this commission: two Archons and a Haemonculus. The Archons will have an almost inverted scheme, with mostly bone plate and red accent plates. Following that there are two Raiders, a Ravager, 10 Scourges and 10 Whyches to round out the commission. Once that’s complete I’ll be moving on to the full assembly and painting of a Warhound Titan, so keep your eyes peeled for that.

In the meantime, thanks for reading, and check out my studio’s website.