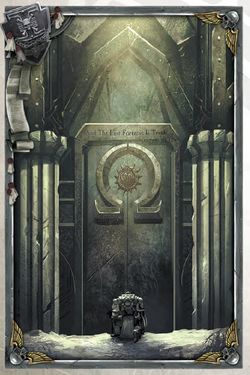 Captain Morgan here with some musings on the newest faction in 40k: The Deathwatch. An ancient warrior-brotherhood that sort-of resembles what would pass for an awkward family reunion for the Adeptus Astartes, the Deathwatch have their fair share of secrets (like most families). Among the gems we at FTN have uncovered so far, the Omega Vault is by far the most fascinating…

Located in the Watch Fortress Erioch in the Jericho reach, the Omega Vault is a mysterious and complicated mechanism with a very unusual M.O., as it functions autonomously and opens up specific chambers to aid the Deathwatch in their wars across the sector. Undeniably human by design, the vault has yielded many an oddly convenient tool in the campaigns launched out of Erioch Fortress, and not just a few cryptic ones as well. With Void Shields on all the doors and contained in Adamantium as thick as the prow of a ship, you would think that would be security enough. You would be wrong, as the whole vault is filled with a gas heinously lethal to anything that isn’t human.

Among the gizmos it has granted over the ages are ancient weapons, lethal bio-toxins, and even an astropath in a Statis Field who sent a message, spoke 2 words, and then died (presumably of pent-up boredom…). It’s been opening up a lot more recently, because in case you haven’t noticed, the universe is kind of dangerous lately. What we know is it has what we need to fight the pesky xenos, but we don’t know who built it or what’s in the last few vaults remaining unopened. Cue the x-files music, folks!

As with most things we don’t know a lot about, it is fun to speculate, and we have a couple of theories as to what is going on inside of this thing and what it may represent. For those who care about such things, here’s a bit of a warning in advance, as I’ll be covering some lore bits that may not be common knowledge yet.

Here’s Captain Morgan’s top theory on the Vault’s final chamber: Omegon is in the middle of the Vault.

Yeah so you’re thinking: “‘Omega Vault’ like ‘Omegon’ the twin Primarch of Alpharius of the Alpha Legion. Suuuper clever! NOT!” aren’t you? Well, I have more than just a convenient name to back up what makes me think this could be right. In the description of the vault, it mentions: “Engraved upon it are the symbols of the Deathwatch and the elder Terran rune “Omega,” surrounding an image of the Emperor strangling a coiling serpent.” So, what is the symbol of the Alpha Legion? A hydra portrayed as a three-headed serpent. Who has never been found since the Horus Heresy? Omegon. Coincidence? Probably, but who cares! This is part of the fun of 40k.

Others seem to think that Omegon is the first supreme grand master of the Grey Knight – Janus.  Janus is, in Terran mythology, is depicted has having two faces.  But this hypothesis doesn’t stop here.  He is also considered to be the god of passages, doorways, endings and beginnings.

The origins of the Inquisition start with one man – Malcador.  Malcador knew he had only a few people in the entire Imperium that he could trust to withstand the foul touch of Chaos.  Could Omegnon have been one of these people?

This could be any number of things, but what I want to know is what do YOU think is inside the vault? Let us know in the comments below and stay tuned for more Deathwatch content on FTN!

One thought on “Secrets of the Deathwatch – The Omega Vault”