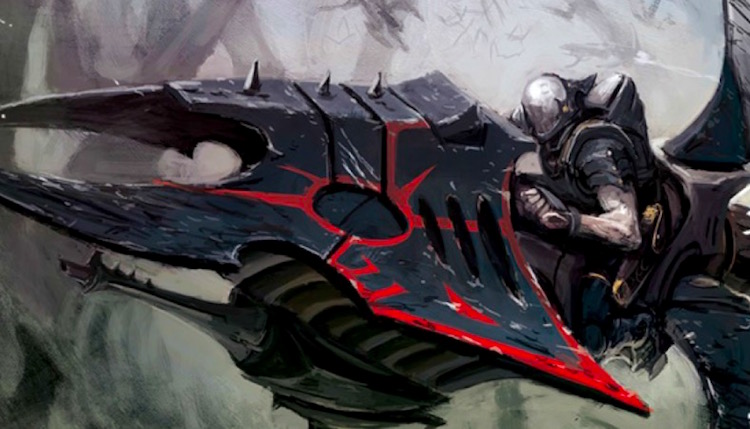 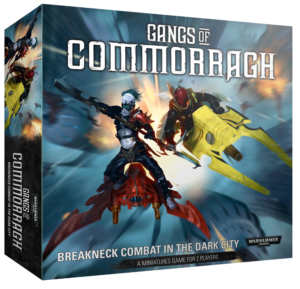 When I see a boxed game from GW the first thing I do is look at the figure list.  It is a brilliant move of the company to offer alternate uses for their model line.  People just after the models may be able to pick them up at a break. The people who want a different game experience get that too with no compromise to game piece quality.

The Gangs of Commorragh doesn’t disappoint on either of those levels.  I was lucky enough to get an early look at the box and I want to pass on my thoughts to you guys.  At the bottom of this review I have a summary – if you don’t have a lot of time you can skip down to it.  The game is available for pre-order right now.

The game comes with 6 Dark Eldar Reavers and 10 Dark Eldar Hellions.  These figures have been out for a while, and if you already have some, they are the exact same. If you’re a Dark Eldar player right now you’re basically ready to start battling it out with other gangs immediately.

The gangs in this game are broken up into Murder Packs.  I’ll get to that again in a moment.

The game comes with a few terrain elements.  These are pretty interesting.  I wasn’t sure what I thought from looking at the box, but these terrain pieces represent the tops of spires and buildings on Commorragh.  They are all you can see above the clouds of smoke and fog on the planet.

That is actually kinda cool and plays into the spirit of the game.  It’s not a coincidence that all the figures are mounted on some sort of vehicle.  The Murder Packs are flying above the city and each of the different figure types have advantages or disadvantages that come up during gameplay.

This is a two-player game and, as luck would have it, the game comes with two Quick Reference cards.  These cards explain the sequence of play and the various modifiers that come up. There is a neat short story before each rules section in the book that helps set the mood.

The game set up is novel.  Play is designed for a gaming surface at least 3’ x 3’ but also allows you to play on bigger areas.  This is just the minimum.

Deployment is determined by which side gets the drop on the other.  Both players roll off and the loser deploys first.  One of the neat things is that the loser has to deploy with his figures close to the center of the table and all facing the same direction.  The winner of this roll then has to deploy his Murder Pack near a randomly determined table edge. 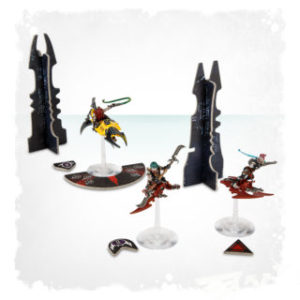 This effectively demonstrates one Pack getting the drop on another in an Ambush.  Depending on how bad the Ambushed player lost the roll they are then able to change the facing of their figures using an ‘emergency turn.’  If you lose by a big enough margin you are pretty much sitting ducks waiting to get reaped.

Facing is a big part of this game.  Attackers (Hunters) will get modifiers depending on which arc they are attacking the defender (Quarry) from.

Game play is very different from 40k.  It happens in a ‘you-go-I-go’ sequence.  Players roll off each phase to determine who starts acting first.

Sequence of play goes something like this….   The fights occur when a Hunter is able to select a Quarry.  Basically, someone from your Pack lines up someone from the enemy Pack in their sights.  It is possible for a Quarry to also be a Hunter of someone else on further down the line.  When this happens it sets off a chain of events starting with the player who rolls the highest.  You essentially are rolling for initiative every round.   The momentum of the battle can change from round to round and I like that.

This starts with each player selecting their Quarries and models with Quarries become Hunters.  The Quarries move first, then the hunters, then we go on to the Attack Phase.

The game provides counters to determine who is a Hunter and who is a Quarry.  I say that with a bit of a disclaimer – the game does have counters but they are not cumbersome.  There are just enough to be informational without bogging the game down in tedium.

The movement phase is another large departure from 40k and really cements the fact that this is a board game all its own.   Figures in this game have minimum move distances and limited turning arcs (without using a special skill or maneuver).  This gives a nice feel of aerial combat, but almost like a naval game.  Sort of like you are trying to move ships around in Armada.  Some riders have skills or maneuvers they can perform during their movement activation.

Now.. the bloody stuff.  Attacks in this game are determined by 2d6 compared to your TARGET’s agility score.  If you meet or beat your target’s agility score, you hit.  Weapons and model position relative to the attacker modify this roll.

A model can Jink to try and avoid damage but if they Jink, they can not attack this turn.  Jinking adds the target’s Pilot score to their agility, making them harder to hit. 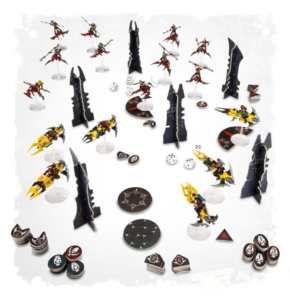 Each weapon has a Kill Value.  When you score a hit on a model you roll 2d6.  If the roll equals or beats the Kill value of the weapon then the model is removed.  If you fail to do that, the model is only injured.  Each injury makes it easier for the next attack to get the kill

When a Murder Pack has suffered a 1/3 or more casualties it must start taking break checks.  A failed check means they bug out.  One of the neat things about this game is that you, as the controlling player, can also just decide for your Pack to bug out.  I can see this coming up a lot in campaign style leagues.  It’s conceivable that you start to get a few injury markers on your guys and you  want to split before you end up eating a casualty (or maybe you’re into that because you’re a Dark Eldar)

Choosing the Murder Pack and Campaigns:

The game comes with a couple of pre-built forces but it also includes rules and points values for building your own from scratch. All the weapons on the sprues are available as options. Each of them has a game stat you may find is good for your gang or fit into a specific point requirement.  The game suggest your starting for be 750 points.

In a campaign setting the game gets even more strategic.  You divide your force up into several Murder Packs and RANDOMLY determine which Pack takes part in the fight.

Each engagement generates income that you can turn around and spend on making your gang stronger.  The more Murder Packs you divide your forces into the better it is for income.  It is said that while you’re controlling the force you rolled, your other Packs are out there making you stacks of cash.  It’s a neat risk vs reward mechanic.

The game comes in a beautiful box embossed like a Codex.

The game comes with 16 Dark Eldar figures and a set of unique tokens and terrain features.

The game rules a quick to read and easy to understand.  If you already have models for this you’ll be playing just about as soon as you open the box.

The way the game is set up there is PLENTY of room for expansion.  The game stats for each figure are determined by the Rider, The Rider’s Skill, and their Vehicle.  It makes sense this can be applied out to all other figure ranges that have vehicles with riders.

The box says you can get through a game in an hour.  It seems like it would take less between two players who are familiar with the rules.  The box is very affordable.and if you have a buddy interested in playing I suggest splitting the cost to make it even better.  You can easily build all these models in an afternoon and start playing.