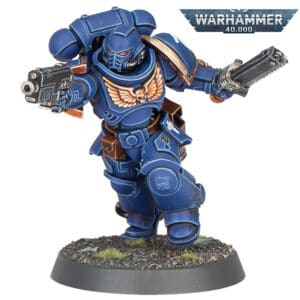 The Warhammer 40,000 preview has me more than just a little bit excited. The leaked character models and options for both Marines and Necrons look freaking amazing.  We’ll break them down as we get wind of the rules but right now I want to engage in a little wishful thinking.

Among the many things spoiled we got a peek at the new Space Marine Assault Intercessor. If you want to hear us talk about it on the podcast check it out here.

Options for the Primaris line are dripping in.  It’s hard to tell ‘why’ these updates are coming so slowly.

Is it because of model production and lead times?

Is it a theme choice?

Did Marketing decide to do it this way because they wanted to stagger releases to show consistent sales?

Was GW concerned about invalidating everyone’s Space Marine collection all at once?

We have a Sigmar Stormcast narrative device that allows for Belisarius Cawl to crack out new things whenever he or the Marketing machine needs.  Personally, I’m okay with this and am somewhat surprised we haven’t seen more variation to the Intercessor squads yet.  I expected they would ALREADY be competing with the options of Tactical Squads.

With all that said – I play Blood Angels.

In the most recent Codex update from Psychic Awakening we received Death Company Intercessors in the Elite Slot.  For one extra point you get the Death Company rules on top of the Intercessor rules.  It’s cool… Don’t get me wrong..  But still, you aren’t taking these options.  There are just too many things competing for the Blood Angel Elite spot in an army list.

We don’t know which Force Org slot the Assault Intercessor will fit into yet.  Am I legally allowed to still say Force Org Slot?  I hope it is a Troop option.

Even if it isn’t it still may be enough to creep into a Blood Angel list depending on some of the other change in 9th.

From the teaser we see there are several Vehicle changes coming down the pipe.  I’ve long been a fan of the Impulsor.  I’ve employed them to great effect in Space Marine builds and was planning to use them in a few Blood Angel variants this year as well.  These vehicles already Fly and enjoy amazing benefits from that rule but maybe we get more?  Some seem so focused on the fact these Marines don’t have jump packs but they might not need it.

The Assault Intercessor doesn’t seem to come with a jump pack option.  I believe this is temporary for at least one of the options above but that doesn’t mean you shouldn’t be excited about it.

A Space Marine Intercessor comes standard with two attacks.  A chainsword would add one more. Shock Assault is another.  This basic trooper will have 4 or more attacks each.  Even more importantly I think we can assume the Sargent will be allowed weapon upgrades allowing you to sneak in a few mighty blows.  These guys will also be a target for Stratagems.

These guys should be cheap enough, points wise, to include several large squads or be paired with the Imulsor.

Stratagems like Transhuman Physiology and Gene Wrought Might are going to go a long way with these guys.

As a Blood Angel player I’m excited about the +1 to Wound, buffing them with Character Auras.

I can’t say that these guys will be a staple unit yet but I am excited about getting my hands on them and painting them red.

I get it.. I know the BA have their roots as Codex Astartes Adherents but something just doesn’t feel right taking Bolter Marines with them anymore.  I really hope these Assault Intercessors are Troops and I can find a place for them in my army list.